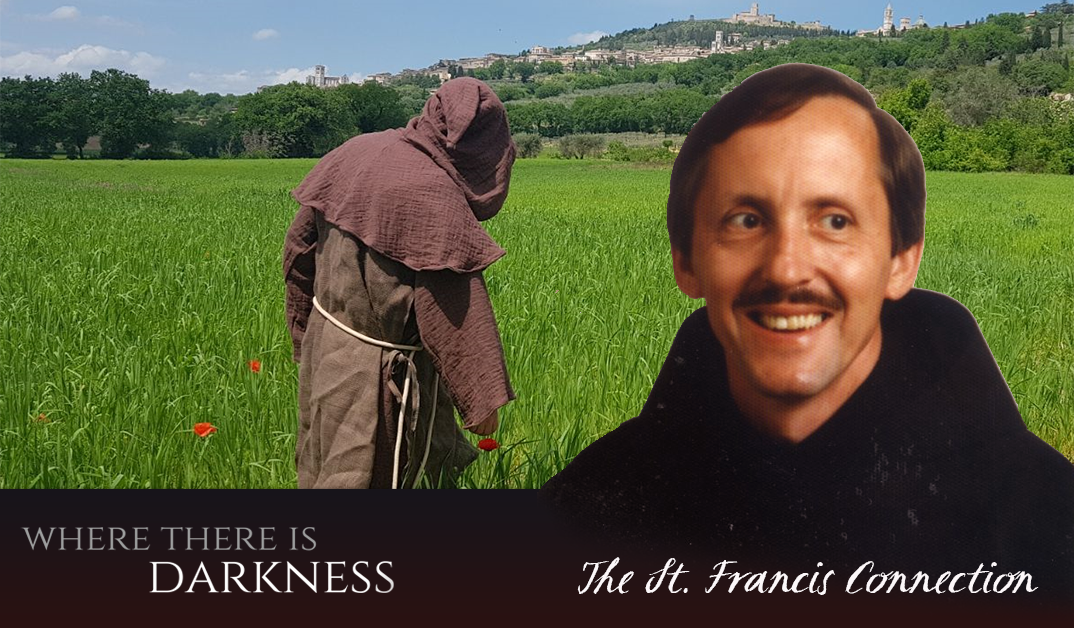 Fr. Rene Robert, the main subject of Where There Is Darkness, was very devoted to St. Francis and tried to emulate him through works of charity, poverty, and love for the less fortunate.

Select St. Francis Scenes from Where There Is Darkness

WHERE THERE IS HATRED, LET ME SOW LOVE

Fr. Rene was born on September 2, 1944 to a young mother who gave him up for adoption just months after he was born. He lived in an orphanage until he was four years old, when a loving family adopted him.

The first time his adoptive parents took him to church, he started running up the aisle and pointing at the priest, saying, “I want to go up there! I want to be with that man!”

He joined the Franciscan order as a young man and later became a priest in St. Augustine, Florida.

The Franciscans, who emulate the teachings and practices of St. Francis of Assisi, were among the first Europeans to arrive in the New World and are deeply ingrained in the history of America’s oldest city, St. Augustine. The first Mass in the New World took place there on September 8, 1565—the feast of the Nativity of Mary—when Admiral Pedro Menéndez de Avilés and his crew came ashore. Soon after, the Franciscans established a friary in the same location.

Intent on spreading God’s word among the Native Americans, the early Franciscans trekked deep into the Florida wilderness and lived among the Timucuans, inspiring many of them to swap practices like human sacrifice for the teachings of Christ.

Much like the intrepid Franciscan missionaries before him, Fr. Rene risked everything to minister in a savage, unfamiliar place.

His wilderness was the streets. His natives were the drug addicts and criminals.

Few people knew the extent of his ministry. Little by little, and almost entirely in secret, Fr. Rene helped countless broken people put themselves back together.

Through eyewitness accounts from some of the many people he helped, our film intends to highlight the selflessness and empathy Fr. Rene displayed through his countless acts of love.

Lord, make me an instrument of your peace.

O Divine Master, grant that I may not so
much seek to be consoled as to console;
to be understood as to understand;
to be loved as to love. In fact, our film gets its title from the sixth line of the Peace Prayer: where there is darkness, (let me sow) light. And, just as the prayer says, Where There Is Darkness reaches beyond other movies and television shows that feature similar subject matter to present a tale of hope and mercy amid the tragedy.

Although the story is centered on a murder, it’s truly about the light that shone in darkness—a light that continues to shine and will only get brighter as we work to spread Fr. Rene’s story to the world.

Still Frames from Where There Is Darkness with St. Francis