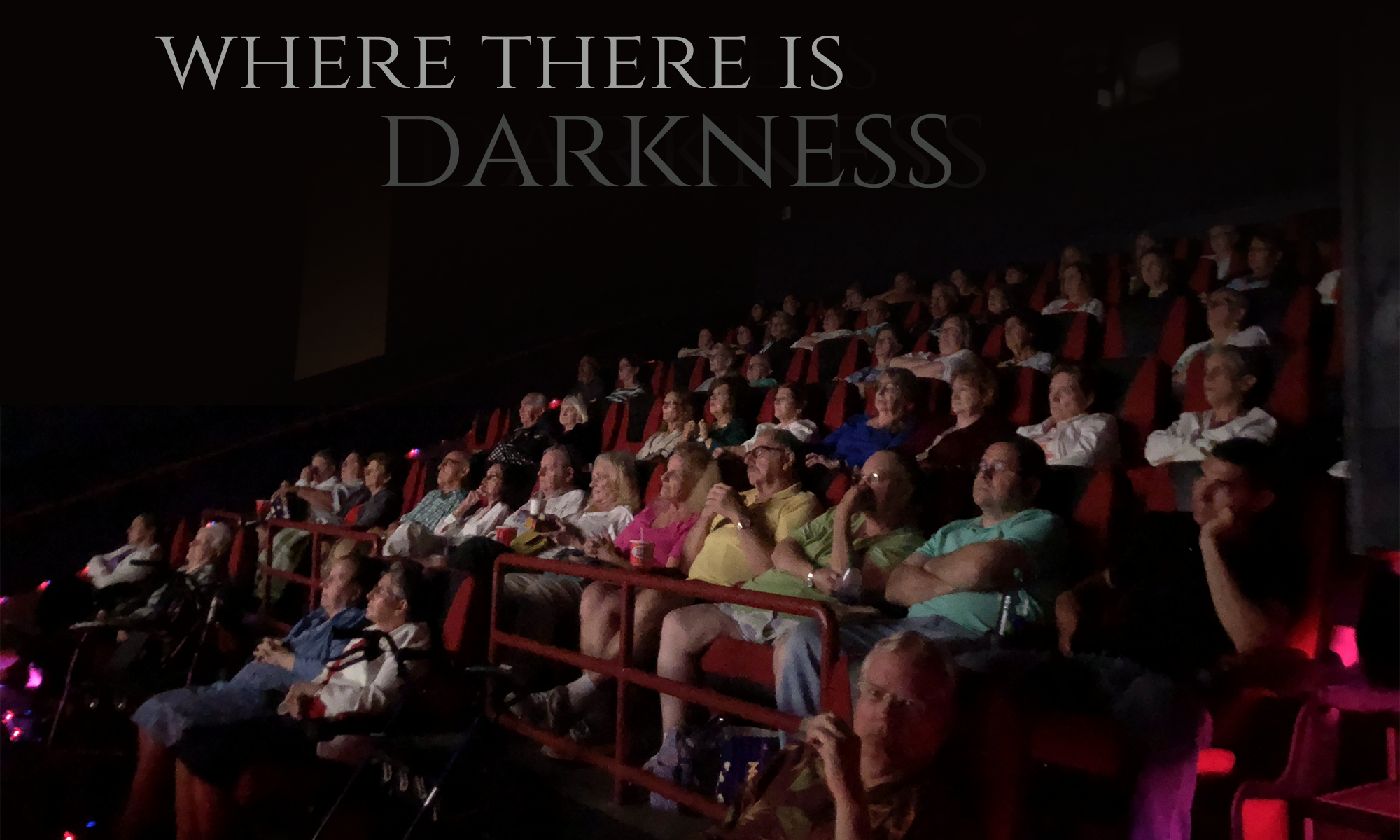 Critics and audiences alike are being touched by the complex, beautiful story in Where There Is Darkness.

Read reviews submitted to us by audience members below. To submit your own review, please scroll down to the bottom of this page or contact us.

I love the way it started, I love the way it ended, and I so admire the way there is not one single question in my mind that was unanswered by [this film], truly a remarkable tour de force. Really really beautiful brilliant job!

“Where There is Darkness is a powerful story of how a single act of mercy can be the catalyst toward restoring a community impacted by grave harm and trauma. This film illustrates the depth and breadth of what it means to value all life. The story of Father Rene Robert and Stephen Murray is one that grips you and stays.”

I just got out of the screening in Conroe for “Where There Is Darkness” and I had just had to say that I am completely in awe of how well this film was made. Thank you for taking the time to film this and for sharing Fr. Rene’s story with the world. The meaning of forgiveness has changed dramatically for me in the last couple of months and seeing this film has added so many positive thoughts about forgiveness  to everything going on in my life. Thank you for everything!

I was able to view the film locally last night and it was incredibly well done and received. The moving and poignant message that the death penalty is not the answer for crimes, and the insightful and probing exploration of the psychological dynamics of violent crimes [provides] an excellent tool to advocate for the abolishment of the death penalty.

Loved the movie.  It meant a lot more to me due to my recent involvement in prison ministry, particularly as it relates to the complicated issue of the sin of parents creating the predisposition of their children with crime.

… and besides the production, which is excellent, I think the message of the movie accomplished many purposes; it has a profound effect in people’s lives, like Father’s Rene and Steven’s family that will have healing thanks to it, it also touches the audience very deeply… and of course honors Father Rene. A mustard seed grows like the biggest tree, and I feel this movie has a very important purpose to stand for life and forgiveness!

Where There is Darkness was a praiseworthy film in many ways.  I came away with an admiration for the priest, his ministry, his final sacrifice, and the power of his declaration of life.  You also gave me an appreciation for the perpetrator and his family.  The people you interviewed were so believable.  And unlike most films today, yours is edifying and will help to promote goodness.  I was also impressed by your art as filmmakers, how you were able to weave together many different things so effectively.  I hope that your film wins many awards.  I believe that Fr. Keon would have been proud of you.  I certainly am.  May God bless you, this film, and your future as a filmmaker.

A new must-see film from the Director/Producers of Apparition Hill.
The opening scene sets the tone for this amazing film as it weaves through the lives of those connected to this horrific crime.  A true crime dramatization that is retold as only the people involved can with an ending and message that will reverberate throughout our culture.

Sean Bloomfield and Cimela Kidonakis expertly extract the stories behind the headlines and capture the human frailty of all parties and make you feel for both sides of this crime.
Their directing and editing bring you into direct contact with the crime as it unfolds, the people involved at all levels, and pierces the history of pain, love, hope and struggle each life experienced.

Expect to find yourself embracing the victims on both sides of this crime as you laugh, cringe and yes even love each person’s brokenness.  The story helps leads us to an understanding of the anguish, betrayal, healing and love that has been inflicted on each involved.

Love Thine Enemy is one of the hardest commands Jesus gave us, and you will understand it better after seeing this movie.

I recommend watching WTID so that one can get to know Fr. Rene, his selflessness, his willingness to disregard his own safety in his efforts to reach out to another in need, his commitment to mercy and the dignity of each person, and the beautiful ramifications of a life lived with such love.

This beautiful movie is reminder what is life all about – love, faith and mercy.

I am so grateful to stella mar films for all the hard work and dedication that went into the film. You all are such a blessing and I pray this film blesses others.

Is the story of a servant of the Lord. He was a simple man who never give up on anyone. He always was there for our community 24 /7. He was fluent in ASL, and tried so hard to learn Spanish. He love the hispanic people, we were his people. Father Rene loved the deaf and and blind, specially the children with special needs.. Father Rene helped all people with disabilities that came to him looking forward to receive his blessings and inspiration. He loved and respected and accepted every one. He visited other churches as an emissary of love. Father Rene Robert was always there to counsel, console and support anyone in need, no mather their race or religion. For more than 40 years he was part of our lives, never decline to attend our humble homes, eat and share with us, as part of our families. He baptized our children, helped us with communion preparation (and grandchildren,) performed weedings and funerals. He was our source of inspiration while someone was hospitalized or in need of spiritual support. There is no one who could take his place in our lives, no one at all. With his death, we loss our father, best friend and pastor. The movie shows how much he loved us, people in general and he died trying to help the criminal that took away his precious life. I love father Rene, there is not single day passing without thinking in his love and the goodness of his soul. God bless you Father. Thank you to the director and producer of this film. Is good for everyone to know that we had the opportunity to be part of his ministry of love.

I felt this film was an amazing piece of work and you will not leave the way you came , but with a whole new perspective on mercy and forgiveness!

I value very much that there is no hint of the “pious” in the narrative.  And yet you captured and honored the faith element in a way that empowers [it].

At the same time you succeeded in telling the story without reducing to denominationalism, without making it a “promotion” of an agenda for either a faith tradition, a moral point of view or proselytizing.  After all, it could have been a moment when some “Catholics” might say: this is a Catholic theme that serves us well in opposing the death penalty.  None of that was present at least to my sensibilities.

I have to believe that any law enforcement people who will see this will see a story that defines their profession, their public service.  In these times of distrust of the police, this can go far toward a rehabilitation of that image, not to mention how those in the profession actually live it out or how they set their horizon for such public service.  Those two officers could put us “professional” people of faith to shame.  They portray a story of professionalism, all the while remaining “real” human beings; and, in such a context you sense their own path of conversion.  Their good souls, their own good consciences were seeking a way to articulate something deep in them and deep in our mysterious bond with God, our authentic identity.

Perhaps what most of all surprised me as a “take” on the film: I came away feeling something about “us”.  It was not about Fr. René.  This was not a “saint” story.  When you allow all the pieces and parts to have a place within, what occurs is the recognition, playing off the well-worn phrase “It takes a village to raise a child”, that it takes a village, at every turn of life, to do life as God has in mind, as life is written by God in us.

It was and is a story about us.  And none of the “story” is ever finished.  It continues to unfold and key to cooperating with the “nature” of the truth God has established is that we allow it to unfold according to a tireless and unalterable commitment and practice of hope.  We each of us have our part to play, though the story is never to be told or wrapped up by any single effort or initiative of any of us…but according to a surrender to the mysterious truth of the “whole” working it out…but again according to the hidden discipline of hope and never giving up on where that hope can…and will take us.

You succeeded at leaving the story with its own voice so it could tell the story rather than you imposing a story.  The “theatrics” were measured and, I felt, used appropriately.  That is pure “art”, pure genius.  That was obedience to the project.  You masterfully connected the dots and equally so you explored the “in-between” the dots so to provide ground for interpreting, unpacking, seeing into the hidden parts of the realities, without judgement.  It was a “coming to know the truth” without force.

Finally I would say that a good “test” might be if it served to “form” me.  I have to say, “Yes”, I do feel it “evangelized” me, made me more attuned to what is the Good News; it did serve to make me more aware of what is at stake in people’s lives and that our total view as Church is to be “hope”.  We are to be untiring in that commitment.